Rose and the Enchanted Seven    A young girl must battle an ancient evil for the survival of her kingdom, her family and possibly her very own life 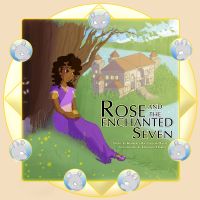 A young girl named Rose, foretold by an ancient prophecy must battle an ancient evil, which has reawakened and taken hold over her beloved kingdom. Adrift in sadness over the death of her mother Rose must decide to remain strong or fall prey to evil to save those that she loves.

Kimberly Batchelor Davis is an author and screenwriter of tales of fiction, which include current events featuring high drama and suspense. Her debut short story Rose and the Enchanted Seven will be released online as an e-book.
Kimberly is also an event planner and fundraising consultant. She is a life-long resident of Detroit, Michigan who is married with two sons. Kimberly is a precinct delegate, community organizer who is very active in her community. She sits on o several non-profit boards and supports her husband’s passion of working with kids through sports.
In her spare time she loves watching movies, reading a good book, experiencing new cultures, travelling and writing. She is also a contributing writer for MiEstilo, an online magazine for the Latino and Hispanic community under the pen name Nicole Davis and http://www.thebrandnewmommy.com as a featured writer who discusses writing, depression and motherhood. You can learn more about Kimberly at http://www.batchelordavis.wordpress.com/2011/08.
She will launch her very own website soon http://www.KimberlyBatchelorDavis.com .

Today at 5:30pm on the Michigan Literary Network blogtalk radio you’re in for a treat as Sylvia Hubbard talks about the book Dying to Be Loved by Erica Coleman.  Dying To Be Loved is a book written to encourage, inspire, entertain but also deliver those looking for love in all the wrong places. For more information about Erica check her out at http://www.ericacoleman.com/

At Last, is her first work of fiction. She is in the process of completing her second novel, the sequel to At Last, Here and Now due for release Spring 2012.

Becoming a published author is her dream come true. She hopes to touch and inspire readers with her words and characters.

Bianca resides in a suburb of Detroit with her husband.

About the book At Last:

When the search of love leads to the discovery of oneself……

Keisha Morgan is caught in a whirlwind. Between raising a child on her own, maintaining a relationship with her daughter’s father and trying to focus on her career she is dangerously burning the candle at both ends. Without notice, tragedy strikes. A lover from her past returns with promises of a new beginning. But will promises be enough to secure a happy ending?

Guest summary: Deolis Allen is the author of three books, The Last 48, Test of Love and his most recent book, World Orphan Presents: Children of the Residue.

About the book World Orphan Presents: Children of the Residue:

Children of the Residue is a fiction based on actual people used to capture the tragedy of broken homes effects on whole communities. The broken home is stimulated from failed relationships, drugs and economic disparity. In turn the children of the home seek love and strength in all the wrong places. Through their travels they learn contempt for the world.

This read is a sharp blade journeying through the forgotten pockets of America’s ghetto. Set in the 1990s of Detroit’s west side, the reader will learn the effects of the crack epidemic from both sides of the fence. The fictional adolescents in this novel are only mirror glimpses into today’s adults. This novel illustrates the subtle decay of morals, transformation of values and ill imprisoned thought processes that made us what we are.

Corzell is a child nurtured by abandonment, rape and hate. Corzell’s naturally good heart becomes poisoned by the conditions of the ghetto norms and society’s iron handed justice. Power in Corzell’s mind is perversely realized when he successfully pulls his first breaking and entering. Corzell graduates to dope dealing, drug trafficking and armed robbery.

Book 2 illustrates how young men, especially, evolve from being junior high boyfriends to high school predators (players). This piece shows the vulnerability and insensitivity in women that many men overlook in their immaturity. Book 2 demonstrates how the high school hallways for education become arenas of conquest.

While Antwaun Bishop learns his art of manipulation and seduction from his big shot lawyer father, Sharon Stuard’s home is off balance and marred in tragedy. These two children find one another and compliment their loneliness. Neither of them ever reach an understanding of the feeling they believe is love.

Error: Twitter did not respond. Please wait a few minutes and refresh this page.